A gift in today's mail 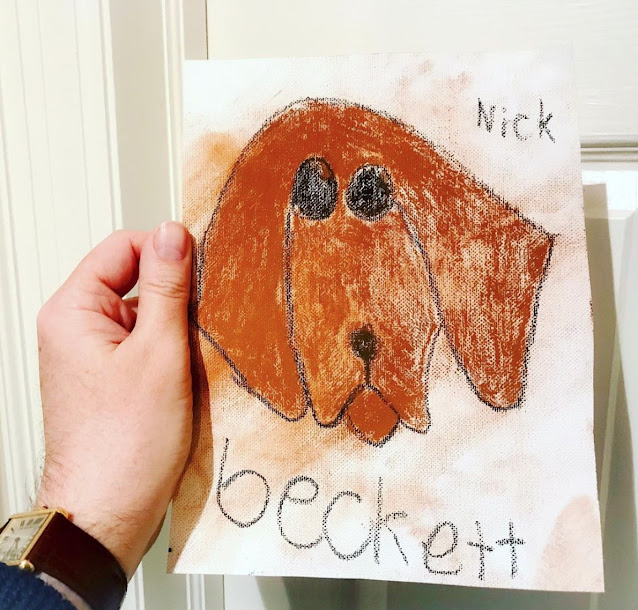 In today's mail, a gifted 8-year old artist of my acquaintance sent me this beautiful rendering of Beckett. It's a given that I will treasure it always, and get it properly framed in due course. One of the truest things about homemade gifts from children is how much of the heart they put into things is on display. They haven't yet learned the social artifice of adulthood, so when the love is there—like it is here—it's a bolt of light, straight to the heart.
Posted by Michael Rowe at 7:40 PM No comments: 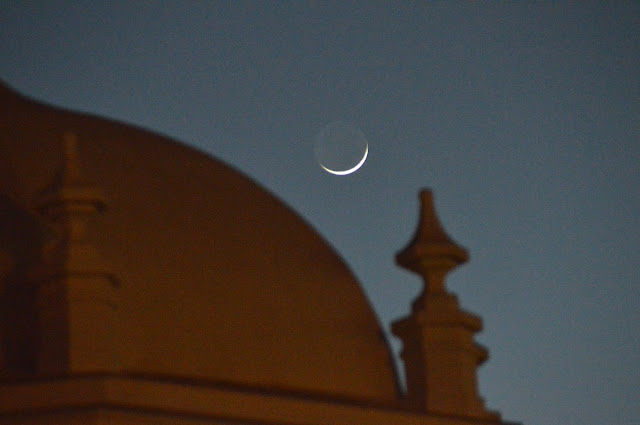 Posted by Michael Rowe at 2:06 PM No comments: 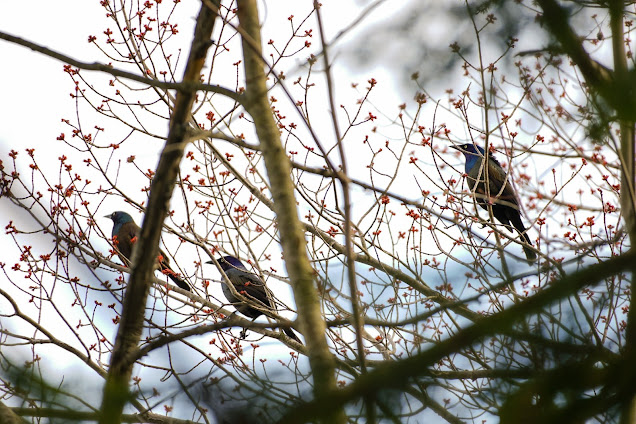 My brilliant godson Michael, who is 16, was born with an instinctive eye for beauty. He is as deft and skilled with a camera as he is with a football. An embarrassment of riches. He sent this to me this morning, and it was exactly the palate cleanser I needed.
Posted by Michael Rowe at 11:57 AM No comments: 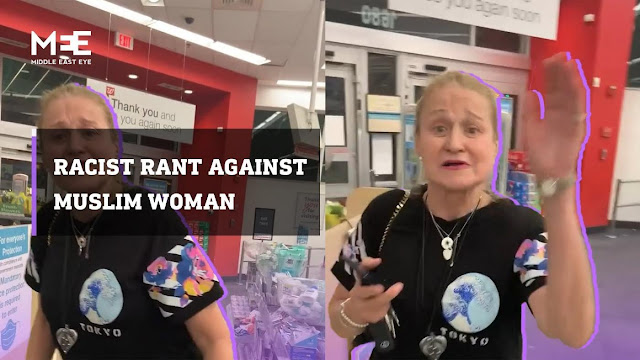 Over and over, I've meditated upon the specific connection between anti-mask entitlement, and the sort of xenophobic, anti-Arab tirade displayed in this horrifying video from Florida—both of which are on display here—(complete with central-casting white female victimhood, and ending with a weepy "Please don't do this to me!" plea to the cops when they arrest her for terrorizing an Egyptian woman and her husband, who were just trying to shop.) The best I can come up with, regarding the connection, is a sense of nearly sociopathic entitlement, an expectation that literally everything occurring in their personal space should be pleasing to them—what they see, what they hear, what other people expect of them, where other people are from, what colour those people are, what they wear, what they say, who they are. When it's not pleasing to them, they've been taught, by politicians and churches, that their "rights" are being infringed upon, and they're entitled to act out in any way they see fit, and that doing so is wholesome and patriotic, even noble. And if it comes down to it, that they'll be acclaimed as justified for this obscene behaviour, and/or forgiven, whether it's murdering an unarmed person of colour in the street, or terrorizing one in a Walgreens. If that's "overthinking" on my part, so be it. It's a way of counting down from 100 until the craving for retributive violence eventually dissipates, because that's no way to be in the world either.

Posted by Michael Rowe at 11:32 AM No comments: 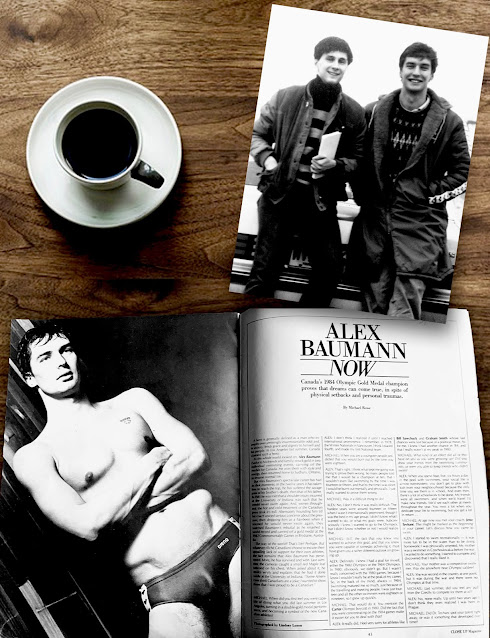 Interviewing 1984 Olympic gold medallist Alex Baumann in Sudbury, Ontario, in 1985, for Close-Up magazine. It was an almost-five-mile drive each way, and the pool area at Laurentian University was so steamy that day that the photographer's flash barely worked. Still, he got this gorgeous portrait for magazine, and I got my interview. A very long winter day, ultimately counted as win.
Posted by Michael Rowe at 7:03 AM No comments: 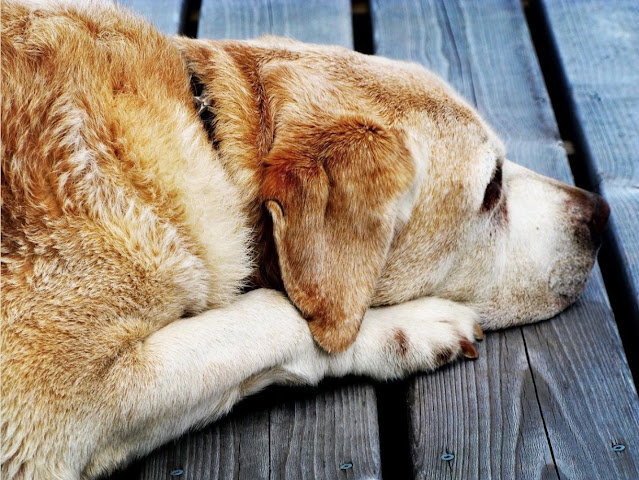 "For his part, Harper’s age was a massive, inescapable truth told through the lens of the Nikon. The perfect coffee-colored eyes were filmy, set deep beneath heavy lids. His coat looked white in the sun. Still, Harper never looked more beautiful to me than he did at that moment. The entire history of eleven summers was there in his face, a face of vast kindness and dignity, and the pure essential sweetness that is peculiar to very old dogs.
"In one frame in particular, my favourite in fact, he’s standing on the edge of the dock with his back to me, staring out across the lake, caught between the water and the sky. Harper body is slightly bent, but still proud and upright. In that photograph, he resembles a very old lighthouse keeper on his final rounds, the last watch of the night."
—From "Life, Measured Out in Labradors," first published on 𝑆𝑎𝑙𝑡 𝑊𝑎𝑡𝑒𝑟 𝑁𝑒𝑤 𝐸𝑛𝑔𝑙𝑎𝑛𝑑 in January, 2017
Posted by Michael Rowe at 9:10 AM No comments: 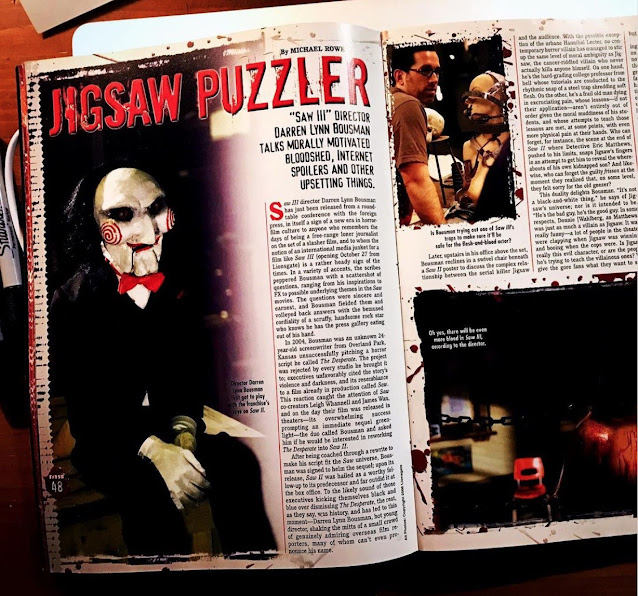 My 2006 on-set interview with SAW III director Darren Lynn Bousman—the cover story of Fangoria #258. What I most remember about that assignment, besides how much I liked Bousman, was that it was around this time that I started to realize that the directors I was now interviewing were, as likely as not, younger than I was. After 17-odd years of interviews with the likes of John Carpenter, David Cronenberg, George A. Romero, Craig R. Baxley, 𝑒𝑡 𝑎𝑙, it was an odd feeling. I can't say I was fond of it.

Posted by Michael Rowe at 9:34 PM No comments: